It’s already Wednesday and I still haven’t written about Melbourne’s inaugural Vegan Day Out last Saturday! There’s a lot of deliciousness to report on, and my memory is fading by the day, so I’d better get on with it.

First of all, Vegan Day Out was actually 2 days – Saturday AND Sunday. We went on Saturday and resisted the urge to go back on Sunday because we’d eaten WAY too much…and anyway, H (my daughter who is in year 12) had too much homework to do, and I had a rally to get to.

It was just the most gorgeous, warm sunny day, and we headed off on the Brunswick Street tram, hoping there would be lots of delicious food and not too many other vegans to compete with.

Well, there were crowds of vegans, but also plenty of food to go around, so we weren’t disappointed.

As instructed, we headed first for the Cruelty Free Shop where we picked up some chocolate (of course), Biona chocolate spread (i.e. vegan Nutella-ish spread), emergency Natio deodourant (!) and our Vegan Day Out maps.

Our collection from the Cruelty Free Shop.

As we were leaving we edged our way toward the tasting table, where we sampled Al Nada vegan Lebanese sweets (they weren’t new to me – I’m already a fan) and FINALLY got to try BioCheese (I’ve been waiting a while!). 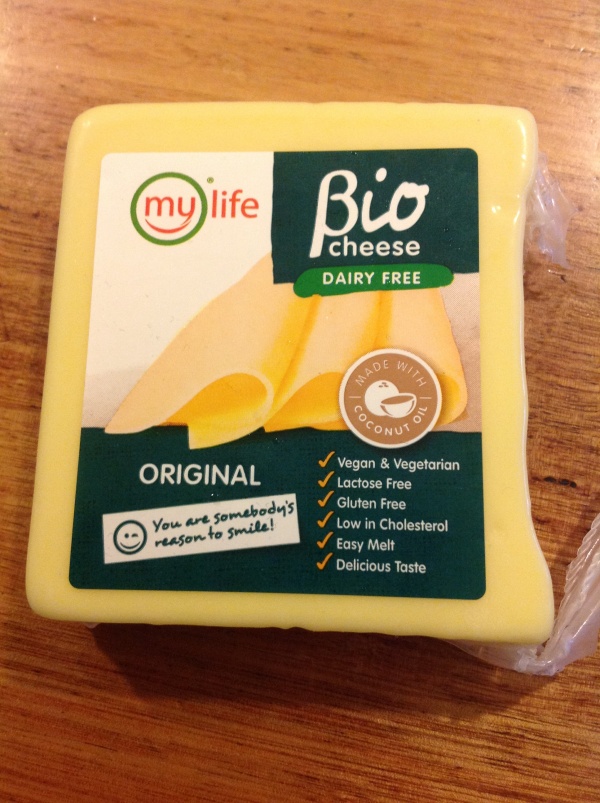 Well, the BioCheese was so good, I had to go straight back and re-join the long queue to buy a block. I was really surprised by how good the BioCheese was. It’s the first time I’ve actually enjoyed a cube of vegan cheese – usually I just tolerate it on pizza or in macaroni cheese. (Nut cheeses aren’t counted in this – I could eat a bucket of cashew cheese!)

It was fairly tasteless, but so is the average Colby dairy cheese. The texture was really good, I thought. I probably wouldn’t normally just eat it plain, but I’m looking forward to trying it in some recipes.

Veganopoulous did a product review of BioCheese a little while ago, and I was intrigued to see that it wasn’t actually developed as a ‘vegan’ cheese, but rather as a cheese that Greek people can eat during Lent.

By the time we finally tumbled out of the crowded shop into the crowded street, we were feeling a bit overwhelmed with the choice of places offering food and welcoming vegans. As it was only a couple of shops away, our first stop was Trampoline.

We used to eat there years ago, but after we went vegan they didn’t have anything we could eat…or did they? Apparently, they’ve developed some really good vegan sorbets in the meantime. It was fantastic to see little sticks in the sorbet with big V’s on them to show that we could eat them! We both chose a chocolate and lemon sorbet…which, in my excitement, I forgot to photograph. But you know what a chocolate and lemon sorbet looks like, right?

I love seeing mainstream shops recognising that there is a market for vegan food!

Having just turned 18 (legal drinking age in Australia), H was keen to go to Cider House. They were offering 30% off vegan meals and free tap cider. Who can argue with that?

As it happens, they have quite a range of vegan meals that I didn’t even know about. I chose the Bean Curd & Glass Noodle Stirfry. H chose The Tofu Smash…and a glass of cider. I really liked my noodles, but H RAVED about her tofu smash – or maybe it was that first-ever cider talking!

My Glass Noodles are in front, and the Tofu Smash is at the back. And there’s cider.

We could hardly move after that, but we bravely headed out to take up the Vegie Bar’s offer of 20% off takeaway vegan desserts.

Lucky they said ‘takeaway’ because the place was PACKED OUT! With my bursting waistband and sticky fingers, I forgot to take a photo, but I’m pretty sure it was the same as the chocolate bar Little Vegan Bear posted about a while back. Unlike her, I’d had it before, so I knew what to expect, and I loved the fudgy filling.

By this time we couldn’t possibly eat another thing, so we went shoe shopping instead.

Now, we’re not the kind of mother-daughter pair that love to shop – particularly for shoes! But H has her school formal coming up and needed a pair of vegan formal shoes to go with her lovely vintage-style formal dress.

As it happens, Vegan Style, which was a not-too-far walk away in Smith Street, Collingwood, was (very cleverly) having a sale on the same day. A nice walk on this sunny day was just the thing to work off all that food and cider, and we passed this incredible mural in a side street along the way.

H found a really nice pair of shoes…in her size (size 42 European, so it’s not always easy)! They’re really comfortable too, with lots of padding in the sole.

And I got myself a Crystalyn Kae handbag that I spotted while she was trying on shoes. Oh, and she got a cute necklace at Rose Street Market too. Now we don’t have to go shopping again for a long time.

Our first Vegan Day Out was a great success. It was fantastic for all those shops to see that there are so many people who want to buy vegan products – and it was really exciting for us to find vegan offerings that we didn’t even know have been there all the time! I hope there are many more Vegan Days Out to come.

Want to find out what else was happening at Vegan Day Out? Read about Veganopouolous’s experience.

6 thoughts on “Melbourne’s Vegan Day(s) Out”