I had another blog post to publish, but I had so much fun today that I’ve put that aside and written a new one. What was so much fun? I made my first trip to the new Melbourne Cruelty Free shop in Brunswick Street, Fitzroy, and then followed it up by taking Vegie Bar takeaway over to my mum’s place to share for lunch.

So much choice in the north!

It’s only a few weeks since Mad Cowgirls opened in Thornbury and now Melbourne has its own Cruelty Free Shop. If you think about shops like Aunt Maggie’s, Harvest (It’ll always be Organic Gertrude to me), Terra Madre (It’ll always be the Fruit Pedaller to me), Joe’s Organic Market and Naturally on High, the northern suburbs are now seriously spoiled for choice when it comes to vegan grocery shopping.

I’m sure you’ve already seen a picture of it. Apparently every time they look out the window, someone is out there with a camera!

When I arrived in Brunswick Street, there were still a few minutes until the Cruelty Free Shop’s 11am opening time, so I spent some time taking a leisurely wander through Fitzroy Nursery, just across the road.  That place is always inspirational, which was timely for me, as we’re giving our neglected garden a bit of a makeover right now…but I’ll save that for another post.

At 11am I scooted over the road and found the Cruelty Free Shop impressively busy for a Thursday morning. The shop is so bright and airy that you could fit quite a few shoppers in there without feeling crowded though. 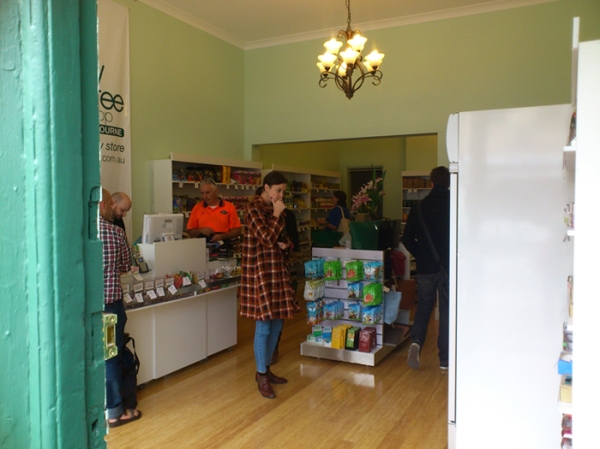 Since Cindy mentioned that they had some cute wallets, I was on the lookout. My old vinyl one died a few months back, and I’ve been trying to track down a nice-looking replacement. The trouble has been that I want a smallish wallet/purse that also has a change section – and it has to be vegan. Not so easy to come by, I’ve found.

Well I found several here, and settled on a green Matt and Nat purse ($69.90), so I don’t have to be embarrassed about my crappy old, broken purse anymore. 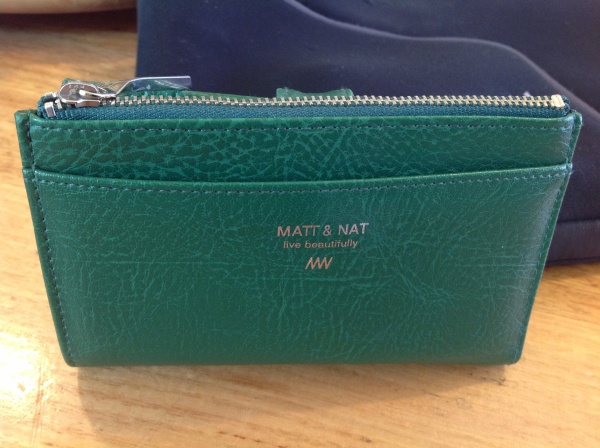 I had instructions from my mum to pick up some Botanical Cuisine cheeses for her. She’s developed a bit of a taste for them and is very happy that, being vegan, they’re cholesterol free.

I picked up a few little treats, including some ‘I’m vegan!’ food flags, which will come in very handy. And I managed to avoid the delicious-looking, 50%-off corn chips. Another customer was raving about them, but I knew if I bought them ‘for the kids’ I’d just eat them on the way home…and that kind of behaviour is why I’ve put on 6kg since I’ve been vegan! 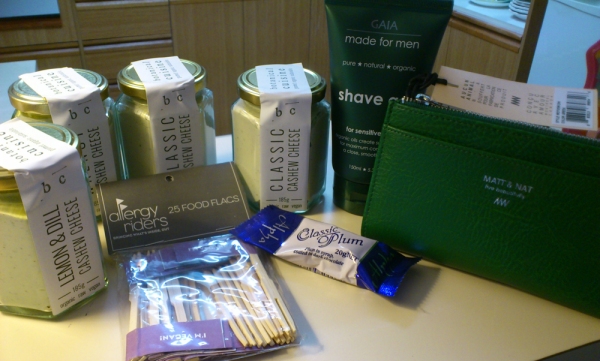 It was still quite early by the time I’d finished stocking up, and I had a brilliant idea. Why not pick up takeaway from the Vegie Bar and take it over to share with Mum? The brightest part of that idea was that I ordered my favourite dish – Mostly Greens. As I’ve mentioned before it is WAY too much for me to eat, so it was perfect to share with Mum for lunch.

I was practically drooling from the smell during the 20-minute drive to her place. So much so, that when I arrived, I served it up so quickly that …you guessed it…I forgot to take a picture. I did get a picture of Mum’s half-eaten lunch, but I think you’d rather just have another look at this one from the last time I tackled this meal (and was far more organised).

This is how it looks BEFORE you start eating it.

It was Mum’s first taste of tempeh, and she really liked it, so I think I’ll have to do this all over again another day…but next time I might have to get ‘the kids’ some of those chips!

Here’s a closer look at my new wallet.